Suicide and the Vendors at the Gorge

Suicide and the Vendors at the Gorge

I heard recently about the woman who started The Gorge Bridge Safety Nework being on a local radio program and stating she didn’t understand why there were vendors at the gorge. I didn’t hear the program so I can’t directly respond to what she said but I thought it best to write something about how vendors at the bridge have dealt with suicide and attempted suicide there. It is especially pertinent now that we’ve recently had another local man take his own life at the gorge.

Suicide by someone jumping from the bridge is something that almost all the vendors have had to deal with at some time. We notice the car that has been left there too long or the person acting strangely around the bridge. There have been times when we have been the ones who have called law enforcement to inform them of the suicide and there have been times when we have prevented someone from jumping. Here are a couple of personal experiences I’ve had:

It was a rainy Sunday morning, the Sunday after Halloween of 2014. I came to the bridge as the rain cleared and, as I was setting out my tables, two hikers came up from the gorge area and said there was a body under the bridge. I went with them to where they saw it from and saw the body on one of the pillars that support the bridge. It looked like a manikin and I wanted to believe that it was one that had been thrown there as a Halloween prank. But then I realized that it looked that way because it was broken and smashed. I called 911 and reported it and later filled out a written police report about how it was found.

This second one is from around 10 years ago. It was a cold day in the late fall. There were only a handful of vendors. A woman drove up and got out of her car. She was very distraught looking. She started to look at our stuff but said she had no money. She told us her story. She had a sick dog that had died and the vet bill had taken all of her money. Her car was a rental that was already overdue and if she didn’t return it she would have an arrest warrant put on her. She was a musician and all she had with her was a violin and some CDs. Several vendors bought CDs from her to give her some money and one of our better known characters, Rio Grande George, had his guitar with him and they played some tunes. George needed a ride back to town and got her to drive him there on her way back to return the car. She looked much happier when she left. No one jumped that day. Sometimes, all it takes is someone to talk to. It might have been different if no one was there.

There are many instances of vendors actively intervening in a suicide attempt. A lot of times they notice that someone is acting strange and erratic. There have been times when they’ve called law enforcement and there have been times when vendors have physically prevented someone from jumping. One time, a vendor’s teenage son ran to the middle of the bridge and tackled a woman who was getting ready to jump.

The reason the vendors are at the bridge is very simple: They are there to earn their daily bread. The fact that they are there exposes them to the suicide problem in a way few others experience. There would be more suicides if they weren’t there. There is one trend I have noticed over the years. As there have been more and more vendors, the suicides have been happening more and more at night when no one is there. In the daytime, there is a lively scene, raucous at times. It is filled with life. There is art to be seen, things that are beautiful, people that are colorful and interesting. What could be better to counteract the darkness of suicidal depression than a scene filled with creativity and life? 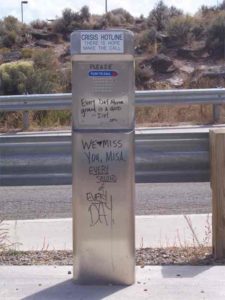 Comments on "Suicide and the Vendors at the Gorge"